RS: Learning From Editing pt2 – Your Story Can Always Be Better

Posted on November 20, 2014 by Raven ShadowHawk

Continuing my new series on what I’ve learned from editing, I want to talk about part of the editing process.

We talk about editing as if it’s a finite thing. As if you’ll reach a point, be totally happy and relieved to let go of your manuscript. In my experience this has most certainly not been the case.

When I wrote Slippers & Chains I knew it had to be edited to within an inch of it’s life because my plan was to self publish it. This was the very first time I managed to pin down exactly what my editing process is.

I printed that bad boy and worked from hard copy smoothing out plot kinks, ensuring there was a clear character arc, giving the story suitable highs and lows. I thought it was done then, but it wasn’t.

Then I went through the bugger again to do all the fine stuff like dialogue and cutting out repetition, ensuring POV was consistent and watching out for swathes of boring shit that readers would skip. Not to mention spending ages agonising over whether I should use ‘pussy’ over ‘cunt’ (I used both in the end). I thought it was done then, but it wasn’t.

Then I had to line edit, making sure sentences didn’t clunk, that my meaning was clear, that my grammar made sense throughout. I thought it was done then, but it wasn’t.

Next I sent it to beta readers (including The Funk Master). I left the manuscript with them and agonised over what they might think of it and then rounded up all those comments and made buckets of changes. I thought it was done then… you get where I’m going with this?

When I sent it to Breathless Press I thought it was done. I thought there would be a few tweaks here and there and that they would run it pretty much as it was after they chose to take me on. Boy how wrong I was.

The first pass on line edits added quite a bit to the manuscript. How much you ask. Why… this much:

That’s when I’m normally fighting tooth and nail to cut words out. But these words, dotted throughout the novella add depth, emotion, tone, background… things that I wasn’t lacking exactly, but now are far more obvious through the course of the story.

Anyway. I sent my line edits back a week ago and now I won’t see the Slippers & Chains again. Not until it’s packaged up with it’s stunning cover and ready to be sold. But it’s still not finished. Not to me. There are still bits I want to tweak and fiddle with each time I look at the damn thing and that, my friends, will always be the case.

I’ve not seen frozen yet, but I get the feeling that this song (or at least the chorus) is particularly appropriate here. 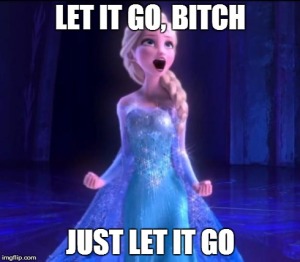 And yes… I am paraphrasing just a little bit.

And that’s me done for the day.

Sorry about all the memes. You can tell when I’ve found a new toy I really like. ;-).

I take great pleasure in writing erotica and am merely one side of the proverbial coin. My other half, 'Ileandra Young' writes fantasy and the occasional comedy piece. My six-part series 'Meeting Each Other' is available in full, through Amazon and Smashwords while my debut novella 'Sugar Dust' is now re-released (!) available through Amazon via Little Vamp Press.
View all posts by Raven ShadowHawk →
This entry was posted in Editing, Raven's Posts and tagged Breathless Press, postaweek2014, Raven Shadowhawk, Slippers & Chains, Sugar Dust, what do editors have to teach you, what i learned through editing. Bookmark the permalink.

1 Response to RS: Learning From Editing pt2 – Your Story Can Always Be Better