First in the ‘Saar’s Legacy’ trilogy, my debut novel, ‘Silk Over Razor Blades,’ follows 26-year-old Lenina Miller’s transformation from ditsy, air-headed human into powerful and responsible vampire. The trilogy also follows Saar, an Egyptian solder from 30BC who fought under Cleopatra VII against Octavian when he invaded Alexandria. 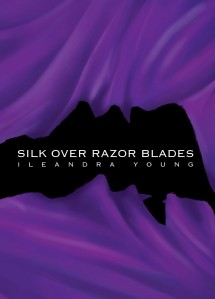 Lenina scrambled to her feet, one hand fisted in her sports vest. ‘Who’s there?’

The tubby ginger tramp stepped out from behind a tree a couple of metres away. His hands curled around the trunk, filthy fingernails scraping the bark. He grinned, showing off crooked teeth.

She froze. ‘You . . . you’re Homeless Bob. I’ve seen you hanging around the High Street looking for food.’

‘I hang out on the High Street, love, but not for any food you can get from a shop. My name ain’t Bob.’ His voice prickled down her spine like dabbling fingers.

Though her mouth opened no words came out. She gave a quick shake of the head and took another step back, wobbling on the uneven earth.

‘Don’t you talk?’ He followed, hands sliding teasingly over the tree’s trunk. One of them held a knife with a savage looking blade, sharp with a double curved edge.

‘Yes.’ She swallowed and tried again. ‘Of course I do. And . . . my boyfriend’s coming.’ She added that last part with a haughty toss of her head. ‘He’ll be here any second.’

He laughed, a sound like grinding metal. ‘Good. I’m counting on it.’

Lenina pressed her shaking hands to her sides and glanced over her shoulder. The line of lights marking the path seemed a million miles away. The brighter lamps from the road beyond the tree line may well have been on the other side of the earth for the comfort they gave.

He glanced left and right. Broadened his smile. A trick of the light made his teeth long and sharp. ‘Go ahead.’

Lenina ran. Her feet pounded the wet earth, each stride made awkward by damp, slippery grass. Her breath stuck in her throat, choking until she let it go in a rasping gasp. Muscles across her stomach and chest tightened. Her lungs ached.

Halfway back across the grass, she risked looking back.

The park was empty. She faced forward and released a shriek when she saw the grubby stranger directly in front of her. Helpless to stop, she bounced off his chest, stumbled back, and hit the ground on her backside. More damp seeped through her clothes.

The man reached down, his chipped fingernails catching on her hair. He stroked her face with the flat of his knife. The sharp point scratched her skin hard enough to break it. She felt its bite and bit her lip to keep from screaming. The smell of cigarettes, vodka and something older, meatier, assaulted her nostrils. She gagged. It seemed a year and more since speaking to Nick, belittling his orders to stick to the path. It couldn’t have been more than five minutes.

The stranger knelt in the grass, tilting the edge of his weapon beneath her chin. With the other hand he gripped her face. ‘Look at me,’ he whispered. When she hesitated, he tilted her face to meet his. ‘I said, look.’

The order beat Lenina’s common sense like a ram. Her resistance splintered beneath it.

First she saw his lips. Thin. Pale. Surrounded by the shadow of short, coarse hairs. Nose: bulbous and red. A set of scars on his right cheek; four thin slashes like cat claws. Then, as the moon slipped from a scudding bank of cloud, she saw his eyes clearly for the first time . . . and gasped. Grey, she thought, like stormy seas. Or smoky diamonds. Gorgeous eyes framed by long, thick lashes which brushed his cheeks like delicate strands of lace. The man was beautiful and in that moment she wanted nothing more than to slide her arms around his neck and offer him everything.

Lenina Miller, ditsy and pampered bride to be, wants nothing more than to walk down the aisle in her scandalous red dress to the gasps and awed stares of friends and family. Her plans are shattered when a late night mugging not only scars her face and neck, but drops her in the centre of a frenzied police investigation to apprehend the attacker before he strikes again.

On the field of battle in 30 BC, Saar, son of Yafeu, sacrifices his life for his sovereign, Queen Cleopatra VII of Egypt. Betrayed by the man he loves, forced to watch his country burn under Octavian’s hostile takeover, Saar’s agonising death appears to Lenina with all the lucid force of a true memory.

Two lives, separated by thousands of years, brought together through one night of violence.

Haunted by the memories of a man long dead, Lenina finds her body transforming, her appetites for food and flesh magnified to terrifying proportions. As the attentions of the investigating detective force her to choose between lust and love, Lenina also finds herself a target. The vampire who attacked her knows she survived and will stop at nothing to finish the job he started.

9 Responses to Silk Over Razor Blades