Sorry guys. I totally missed Friday’s post and just haven’t really been around to chat with you all, here or Facebook or even Twitter. I’ve been so wicked-busy, mostly on my NaNo, but I’ve been out of the house a fair amount too. Not a great excuse though; I should be more organised. Let’s see if I can manage that this week.

Since I didn’t manage a post on Friday I suppose there are some things to catch up. Not the NaNo check in (I’ll do that this week) but what I got up to the day before. Ooooh yes. ^_^

I’ve played Bo Burnham tracks for you guys before. I’ve talked about him before. However in the face of everything else going on I’m not sure if I mentioned that I was going to see him live in Birmingham. Well I did. IT WAS FREAKING AMAZING!

A fantastic blend of old material and new material, visual humour and the usual sharp (and intelligent) wit through out. Nothing is out of bounds for this guy and I love that about him. Everything is up for poking at. Four days later I’m still buzzing from how amazing the show was and how close he got while performing.

The dude climbed off stage and into the crowd, climbing onto the seats directly behind me. I like to think I’m not a crazy-fan girl when it comes to celebrity types, but my reaction to just seeing Mr Bloom in the summer kinda stuck a fork in that. I still get tingly feelings in my toes and he was nowhere near me; just up on stage, singing and talking to puppet vegetables. o.O

But Bo… He climbed onto that seat and his backside was a mere foot from my face. I feel terrible at the recurring thought that pretty much goes like this; ‘I should have grabbed his arse. Or poked it. Why didn’t I squeeze his bum? Or at the very least I could have pulled his fucking trousers up!‘ – I don’t care who it is; the trousers hanging off the arse thing; it bugs me.

And then I had to get through the rest of show trying desperately hard to avoid singing along to every song I knew. I failed by the way. 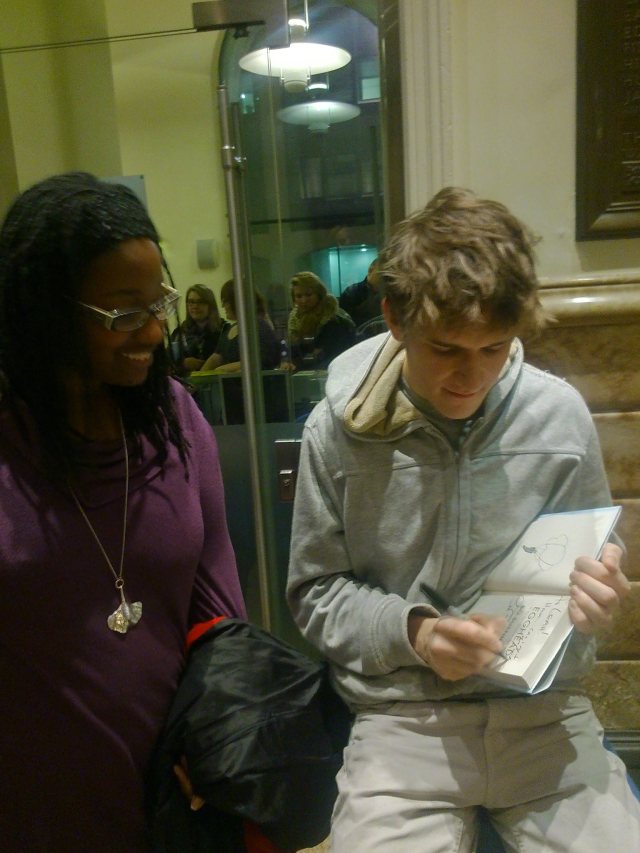 I was on a high all the way home. I still am. The back of my mind is telling me to calm down and stop being an idiot, and reminding me that he’s only 22 (or 23? Ha, like it matters!). But his youth is part of what attracts me. Not in a physical sense (you perverts!), though he is (very) nice to look at. It’s more that I acknowledge that if he’s this talented now, he should (hopefully) improve and mature with age. Like cheese.
Mmm cheese.
It gives me the warm feeling that this is only the beginning and that it will get better and continue for a good many years. Meaning that I’ll be able to see him live again at some point. Hopefully often.

There are more pictures, but Dave has them, so if I can just get him to pass them along, I’ll add them to this post later. Failing that, take it from this picture that it was real, it did happen and I’m not making it up. :p

So that was the absolute highlight of last week. And while the buzz from that led me to get a fair number of NaNo words down, it did stop me from writing a blog post for Friday. There was just too much going on in my mind.
Forgive me?

This week is nowhere near as exciting, though if I continue at this pace I may finish the NaNo draft of SORB. That’s quite an exciting thought. ^_^

Work towards completing SORB (at least 12,000 words)
Yes. And change….

Try not to get sick again (yes, I have been stupidly ill TWICE since my last ‘goals’ post)
I have a horrific sore throat and achy limbs, so no. Fail. But at least I’m not throwing up like I was a fortnight ago.

Finish last edits on AI story and get it sent before I miss competition deadline
Yep. Done. Think I finally cracked the dialogue issue I was having. And since I have a similar fear-heavy scene in SORB to write, hopefully what I learned from Love Bytes (that’s what I called it!) will help me out in that regard.

Double check what next competition on my list is
Yep. And I have plenty of time to get the piece written as and when the time comes. In fact there’s two; I just need to pick which of the pair I prefer.

Get at least half of Phoenix story down, if not all
No. I decided half way through the week to just forget about it until SORB is drafted (not necessarily to the end of November). I want to give both my all and I just don’t have it in me to split my focus that way. So once SORB is done I’ll crack on with the short. Not before.

Chase up models for ‘Carol, Niall & Lin’ cover shoot – so exciting!!!
Yeah, I forgot about this one too. Oops. I think after Bo my brain just went ‘anasdiwh asdkfjwi asdfas 99w34n’ and decided that I couldn’t do any more. *shrugs*

Right. I’d better think carefully about what I’d like to achieve this week then.

That’s plenty. I don’t want to be silly about it.

How are you guys getting along? I know many of you are doing NaNoWriMo or your own versions of NaNo. I’d love to know how you’re getting on. If you haven’t yet, and would like to, please feel free to look me up over there; I’m under Ileandra Young. And that’s i- (as in ‘igloo’) l- e- a- n- d- r- a…. not double ‘l’ as in ‘lion’ as people seem to keep writing. The name is ill-EE-an-DRA. You gotta get it right or you won’t find me! 😉

Laterz lovelies!
Oh, and don’t forget, to be in with a chance to win one of my give-away prizes, chip in through the comments and tell me what has happened to you recently worth celebrating.

I'm a thirty-*mumbles* year old (purple loving, cheese worshipping) author of fantasy, juggling a pair of beautiful twin boys with my burning desire to make up stories and write them all down. When I get the chance, I play games, listen to music, and in days long past I even ran a radio show. Though I occasionally write non-fiction, my heart lives in fantasy and my debut novel, Silk Over Razor Blades is now available through Amazon along with part two of the trilogy, Walking The Razor's Edge.
View all posts by Ileandra Young →
This entry was posted in FUN!, Goals Posts *haha!*, Ileandra's Posts, NaNoWriMo 2013, News, Silk Over Razor Blades and tagged 50k words, bo burnham, complete novel, exciting, fan-girl, goal, goals, hanging trousers, live, mr bloom, nanowrimo2013, postaweek2013, rabid fan, word count. Bookmark the permalink.