Yes! I’m pleased to say that the second story in my Smexxy Snippets series is out today, lovingly titled: ‘A Domme At The Club.’ 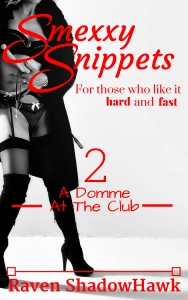 The pet must serve his mistress. Her pleasure is all.

For some, the idea of sexual servitude is a source of confusion and derision. For others, it is the absolute peak of their sexual desires. The act of submission brings pleasure and fulfilment to both the dominant and the submissive in a way few others can.

In this tale, watch a powerful scene between The Mistress and the Pet as they test each others’ boundaries and bring about release in a manner that enlivens them both.

The Mistress, a cheeky, light-hearted woman puts her pet through his paces, with floggers, canes and whips before teasing him ruthlessly with orgasm denial. When the moment final comes for release there is but one thing that matters: does Pet deserve such kind treatment?