Sorry it took so long. Now that all the Dead And Alive faff is out of the way, I’ve been able to go back to my poll and find out which fantasy creature won from the list. As you might have guessed from the post title, I’m going to be chatting about a fantasy creature known and loved by millions

So What Are Dragons?

For the sake of thoroughness, I’ll answer, though I’m personally yet to meet someone above the age of five, who doesn’t know what a dragon is.

At its most simple, dragons are (very) big lizards, with wings. They often breathe fire.

To make things a little more complex, there are two types of dragon (at least as far as I know) which break down into European dragons and Chinese dragons.

More lizard-like creatures with four legs and niiiice bat-like wings. The chap on the Welsh flag is a good example of this type as are all those from films The Hobbit, Harry Potter and the Goblet of Fire, How To Train Your Dragon (squee!) and the epic fantasy flick of 1996, Dragonheart.

Some of these dragons have opposable thumbs on their forelimbs, others don’t, but they generally have a pretty nasty tail that can be used as a weapon, much like their, claws, teeth and awesome fire breathing capabilities.

As much as I like this type, I’ve never written about them. These are more serpentine than the European dragons and often depicted without legs. They generally tend towards wingless. The easiest example here is simple ‘Chinese dragons’ those super cool puppets often filled with a bunch of people in a line during any sort of Chinese New Year celebration.

There are variations on these theme too, but again these are the basic and more commonly seen features.

Fantasy vs History vs Reality

These creatures are so well known, precisely because they pop up everywhere. History and legend is littered with them, from Saint George and his heroic slaying of a dragon, ‘dragon bone’ used for medicinal purposes in ancient China, all the way down to their appearances in the Bible (assuming of course you know old Hebrew ;-p).

Ancient Greeks spoke of dragons as did the Romans. Christopher Columbus and folk around his time, feared that sea dragons lived at the ends of the earth (because it was flat, y’know!) waiting to eat the ships that sailed off the end.

Despite all that, the truth is that most ‘sightings’ of dragons probably related to real wild creatures like lions, elephants and snakes (with whom dragons do share many features). Old dragon bones are probably dinosaur fossils and the ‘great sea monsters’ of old are either whales, or very unlucky sailors caught up in a nasty natural phenomena of some kind. 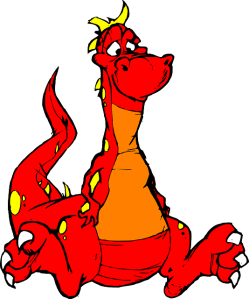 I'm a thirty-*mumbles* year old (purple loving, cheese worshipping) author of fantasy, juggling a pair of beautiful twin boys with my burning desire to make up stories and write them all down. When I get the chance, I play games, listen to music, and in days long past I even ran a radio show. Though I occasionally write non-fiction, my heart lives in fantasy and my debut novel, Silk Over Razor Blades is now available through Amazon along with part two of the trilogy, Walking The Razor's Edge.
View all posts by Ileandra Young →
This entry was posted in FUN!, Ileandra's Posts and tagged are dragons real, chinese dragons, Dragonheart, dragons, european dragons, fantasy creatures, Harry Potter and the Goblet of FIre, How To Train Your Dragon, Ileandra Young, the hobbit, what are dragons. Bookmark the permalink.