Happy Monday, folks! A brand new month and a brand new fantasy creature to chat about for the next four weeks (if I make it that far — I know even less about these guys than I do about zombies, but it should be nice to check them out).

I’ll do what I did before and round up the the month with a piece of flash (ha, hope I’m not setting myself up for a fall here). In the three weeks prior I’ll talk about what these creatures are, where you find them, my favourite myths with them in and amusing/noteworthy film appearances.

So What The Hell?

Unicorns are horses with a single horn protruding from their foreheads. Think rhino, but prettier. 😉 They are often pictured as white, though I’ve also seen them in silver, black and on one odd occasion, bright pink. Their manes and tails also vary in colour though traditionally, I think they tend to be white too. Though there are some awesome variations. 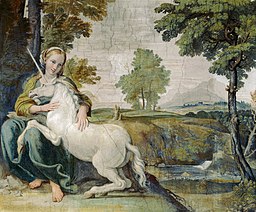 Silly memes are also something that pop up where unicorns are concerned. No idea why . . . but there you go.

These creatures are gentle, intelligent and said to have all sorts of powers like healing and invisibility. Depending on what you’re reading/watching, they also have access to manipulative and illusionary magic. Which is kinda cool (but not as cool as this)!

Well, I like them because they be purdy (!), but also because they are versatile. Next week I’ll talk about a particular incarnation of unicorns that I’ve discovered only recently, along with those from my childhood. Just those two examples alone will give you an idea of the sheer breadth of unique-crazy these creatures can cover.

There are very clear tropes one tends to cover with creatures like werewolves, vampires, zombies and elves, but I’m yet to see that with unicorns. Maybe I’m not well read enough, but these creatures are an untapped source of pure fantasy gold as far as I’m concerned.

I’ve never used unicorns in a piece of fiction before. Now that I think about it I’m quiet tempted too. The examples that spring to mind (that I’ll be discussing in coming weeks) make me eager to at least give it a try, since I think that I could do something new and exciting to them. Something that’s never happened before, or at least not with my personal spin. I see them charging into battle, or baby sitting lost human babies or even disguising themselves as other creatures as strange equine spies.

But if I have to give you my absolute favourite example of a unicorn, then . . . well . . . I can’t believe I haven’t told you about this already:

I'm a thirty-*mumbles* year old (purple loving, cheese worshipping) author of fantasy, juggling a pair of beautiful twin boys with my burning desire to make up stories and write them all down. When I get the chance, I play games, listen to music, and in days long past I even ran a radio show. Though I occasionally write non-fiction, my heart lives in fantasy and my debut novel, Silk Over Razor Blades is now available through Amazon along with part two of the trilogy, Walking The Razor's Edge.
View all posts by Ileandra Young →
This entry was posted in FUN!, Ileandra's Posts, Other Writings and tagged fantasy creatures, fiction, Ileandra Young, unicorns. Bookmark the permalink.