I love doing this. It’s great opening the floor to other authors and sharing them with you. Do join me in welcoming Raven McAllen, a fine super-smexxy lady with a great name 😉

Today she’s given us a look into her latest offering ‘Taken Identity’, re-releasing with Totally Bound. Go, go, go, Raven!

A Word From Raven (not me, the other one!)

Thank you for offering to host me on your blog today. Even though this is all about someone stealing your identity I promise I won’t steal yours (I may use your name in a book though). 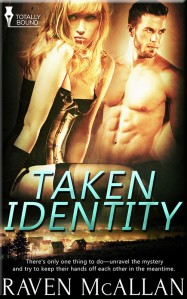 When the devastatingly handsome Gray turns up on her doorstep looking for his wife, and calling said wife by Jules name, Jules wondered briefly if she’d landed in an alternative universe. She knows she’s not his wife, and so does he. But apparently someone with her name and history is.
Is it a case of coincidence or did his missing wife ‘borrow’ Jules’ life?
Even though the dominant Gray sends her knickers aflame with just one look, with a missing wife in the equation, Jules knows there’s no chance of finding out what else he could achieve.
There’s only one thing to do—unravel the mystery and try and keep their hands off each other in the meantime. The first may well prove far easier than the latter.

Jules walked into the restaurant, her long, tanned legs—courtesy of a certain fake tanning spray—bare, and her feet encased in vertiginous straps that could loosely be called shoes, that she hoped to hell she wouldn’t fall off of. Shoes this high were not made for walking. Showing off legs, looking sexy—she hoped—but not for putting one foot in front of the other and moving. Her short, floaty dress, she prayed hinted at—rather than showed—her body and she’d kept her makeup minimal. She might want a certain part of his anatomy to sit up and beg, but she didn’t want to make it too obvious. She still hadn’t made her mind up if she was stupid, or lacking sense because she fancied the socks off him.

Gray stood up as Jules entered the restaurant and walked towards where he waited. She tried to stop herself from drooling. If she’d thought he was drop-dead gorgeous that morning, when he was tired and irritable—well, she’d been deluding herself. Be still, my heart, she thought flippantly as she took in every last, luscious inch of him.

Bloody hell. I sound like a corny, cheesy chic flick, but sheesh, the man’s dynamite without even trying. Heaven help any woman if he turns on the charm. Seen from a distance, he was pulse jumping. Up close, he was heart attack material. Just that lazy smile, those deep, dark eyes and that sexy mouth were enough to get a girl’s pussy eager for action. And if you added in that tight butt and toned body? Oh my. Jules mentally fanned herself.

She tried not to let any of her X-rated thoughts show as she allowed him to lead her to a deep comfy sofa. The hostess took her serape, and with a slight nod of thanks she held on to the bit of satin and ribbon laughingly called an evening clutch, which held her phone, keys and what her mother called ‘mad money’. Not money to spend madly, but to spend if she or her date got mad and she needed a taxi. A wise woman, her mother. Although she’d never needed to use it yet and didn’t think this would be the first time. She’d tucked the twenty-pound note and a credit card firmly in the inside, zippered pocket of the tiny bag. Jules didn’t go as far as her mum suggested by pinning the note inside her bra. She wasn’t that paranoid.

“Right on time,” she said lightly, as they followed the maître d’ to an intimate bar area. She was impressed and showed it. Jules thought there was no point in dissembling. If you appreciated something, why not show it? “Bloody hell, you are pulling out all the stops.” Nerves and excitement made her chatter nonstop. “Tables are like hen’s teeth here. How on earth did you manage to get a reservation?”

He gave a ghost of a smile. “Insider information. Jeff and I were at school together. I’m part owner of the restaurant.”

Jules considered his statement. Obviously a man of means, which from the top of the range Mercedes she had seen driving away from her gate earlier, to the material and cut of his suit, she had already deduced.

“What do you do for a living?” she asked. “You know what I do, where I live, the fact that I have an impersonator—who may or may not be going to get me into deep, er, um…trouble. But apart from your name, I know next to nothing about you. And as it’s your not-yet-ex-wife who is the one causing any not-yet-seen problems, a wee bit of info wouldn’t be amiss.”

She watched him consider his words. Did he know his nose crinkled when he was deep in thought?

Finally, he spoke. “I’m a businessman. I have very diverse interests, all over the world.”

Jules waited, but the clam impression continued. Well, that tells me a lot. Info central he isn’t. “Hence the restaurant and your visit to Melbourne?” She did her best to prompt him.

“Hence the restaurant and my visit to Melbourne,” he said, and then he gave his drink order to the wine waiter. “Champagne now and the rest I’ll choose when we decide on our meal. Thank you.”

So that, Jules my girl, is all you are going to get, she thought, as he made no move to expound further. A smiling youth of around twenty came over to them and handed a set of keys to Gray. Jules tried not to look as if she wanted to know who he was and why he had what must be Gray’s car keys.

“Jeff’s nephew. I have him on the car hire insurance, so he can help me when needed.”

Obviously he had noticed.

“He’s parked the car and will drive us both back tonight. As a result, I can have a glass of champagne with you.”

Jules looked up at him, not commenting on the inference that they would drive home together, but noticing the way his body moved under the superbly fitted suit as he pocketed the keys.

“Who says I want champagne?” She felt a frisson of excitement run down her spine as he smiled back.

“Oh, I’m sure you’ll manage a glass or two. To toast our, shall we say, collaboration?”

I’m a goner. Done and gone. Collaborated, under, over, anywhich way, I’m your girl. And you are the man. Think, Jules, and not with your hormones. Use your brain. Ask him if he’s spoken to his investigator person.

“Of course.” He answered her question, one eyebrow raised as if to signify his surprise that she’d ever doubted him. “Before I flopped for an hour due to sleep depravation—or tried to. You didn’t make it easy.”

His twinkling eyes made Jules think her first impression—and every one since—had been spot on. Sex on legs!

“Me?” She tried to look innocent, but inside she was shouting, Yay!

“You, and those damn legs to your armpits, and that secret smile you have. I’ve been in a permanent state of arousal since I met you.”

She risked a quick glance towards his crotch. A definite outline of a hard cock showed beneath the material that covered it, and she swore it moved.

“Yeah.” He noticed her look. “Don’t worry. I won’t try to do anything about it—yet. Be warned… When I do, you’ll know about it. It won’t be easy, and you’ll need to be very sure it’s what you want.”

Thanks for stopping over with us today, Raven and thanks for leaving us with such a great excerpt. Remember guys, head over to Totally Bound to pick up Raven’s title soon. You’ll not be disappointed!

I take great pleasure in writing erotica and am merely one side of the proverbial coin. My other half, 'Ileandra Young' writes fantasy and the occasional comedy piece. My six-part series 'Meeting Each Other' is available in full, through Amazon and Smashwords while my debut novella 'Sugar Dust' is now re-released (!) available through Amazon via Little Vamp Press.
View all posts by Raven ShadowHawk →
This entry was posted in Guest Blogs, Raven's Posts and tagged guest spotlight, new release, Raven McAllen, Raven Shadowhawk, Taken Identity, Totally Bound. Bookmark the permalink.