Posted on February 2, 2015 by Ileandra Young

Yeeeeeah. So caught up in my own news about ‘Silk Over Razor Blades‘ and my not-success-but-not-a-total-failure-either, I completely forgot about something that is a real success. And actual, total, real success.

Do you remember, all those months ago, I talked about a fantasy ezine? I asked if any of you were interested in writing for it and earning a little bit of £££? Well… The first issue of Fab Fables launched on January 25. ^_^ 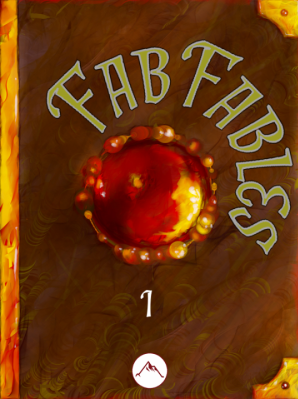 I really can’t think how I managed to forget that. I must have been more upset about Angry Robot than I could admit even to myself because this is a big deal. A mega big deal.

I got involved with The Men from the West, as I like to call them, quite some time ago. I don’t even remember how. But they approached me in August asking if I fancied joining them for an exciting new venture the likes of which the creative world is yet to see. They didn’t phrase it exactly like that, but that was the gist and let me tell you, it wasn’t just tooting their own horns either. I’ve never seen anything like this before. And that is why the whole project is AWESOME!

Anyway, I said yes and, long story cut short, I’m now the Chief Editor for all stories published through Caladria, the first publication being Fab Fables.

I don’t know how to explain it all without going all gooey and fangirl on you, so the basic gist is this:

Caladria (the world) is home to any number of publications in the future. The first of these is Fab Fables (the ezine) which is a monthly, digital publication featuring five/six short stories of a non sequential nature. All stories are set in Caladria (which is a fantasy setting) but the tales range from romance, to crime, to comedy, to thriller, to horror, to political drama. In fact, the only traditional ‘genres’ we probably won’t cover is erotica (heh, sorry Raven!) and sci-fi.

Caladria (the site) is built for the management team, the staff and the fans. Anyone can sign up and interact with the world through the truly awesome maps and wiki pages, all of which are time sensitive. That’s right, you heard me, time sensitive. You look for the wiki page for ‘humans’ at the start of the Era of Primordial incidents (EPI) and it won’t be there. Because humans didn’t arrive in Caladria until almost 1400 years later. Similarly, if your favourite character (lets say… Mbenad) features in a story you like, you can visit his wiki page at the time of his story and see what he’s up to. Then change the setting of the wiki page by a decade or more and see what else has he done. Is he married? Does he have kids? Is he dead? The wiki pages are my absolute favourite feature of the site so far (aside from the map I guess)… I’ve never seen anything like it.

And the best part is, the whole concept of Caladria swings the door wide open for fan fiction writers. Basically… if you see a character you like in issue #3, you can get in contact with us, go through a simple application process and, all being well, write your own story about that character which could publish in issue #6!

We are actively searching for new writers, for people with creative ideas and for fans. If you like your traditional fantasy creatures (goblins, dragons, dwarves, elves) and like in-depth, character centric, stories Caladria should be your new favourite place to hang out.

I’m not going to go on about this much longer, but I do want to take this chance to say congrats and well done to the five authors who appear in our very first issue:

You guys are the ABSOLUTE bomb and I adore you. ^_^

The rest of you… if you want to know what all the fuss is about, this is where you need to go. Laterz, lovelies!

I'm a thirty-*mumbles* year old (purple loving, cheese worshipping) author of fantasy, juggling a pair of beautiful twin boys with my burning desire to make up stories and write them all down. When I get the chance, I play games, listen to music, and in days long past I even ran a radio show. Though I occasionally write non-fiction, my heart lives in fantasy and my debut novel, Silk Over Razor Blades is now available through Amazon along with part two of the trilogy, Walking The Razor's Edge.
View all posts by Ileandra Young →
This entry was posted in Caladria, Ileandra's Posts and tagged by fans for fans, Caladria, Fab Fables, Ileandra Young, new collaborative venture, new fantasy magazine, worldbuilding, write for Caladria. Bookmark the permalink.