I watched The Matrix trilogy over the weekend. I don’t know why… it just ended up in my head and I felt the need to watch it all the way through. 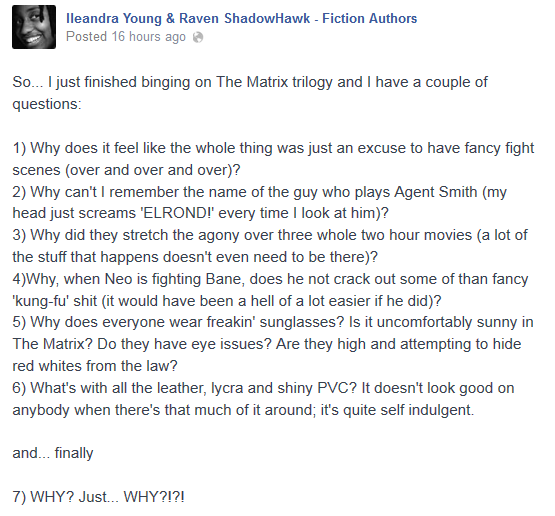 Yes… I was upset

The Matrix was first released in 1999. The next two films came a short while after. I remember watching The Matrix, being so excited about it. It took me three tries to even reach the point where Morpheus gives Neo the choice of the blue or red pill, because various things stopped me being able to watch the VHS (yes, it was a VHS then). When I watched it all the way through I loved it to bits.
I remember talking to class mates in school, being jealous of those kids who had ‘The Matrix Phone’ and being hacked off with my boring Nokia 3330 which didn’t have a cool sliding panel or that great, blocky look.

Ha! If only I knew then what I knew now.

Anyway. The trilogy, despite its age (or maybe because of it) is a fantastic study for me as a writer. I’m going to use my Monday posts over the next three weeks to talk about the different aspects of the film, as highlighted in the title above. Then I’m going to use what I’ve learned (hopefully) to better my own projects.

The Matrix particularly is full of interesting dialogue. I say interesting as I’m unsure what else to call it. I don’t want to call it ‘crap’ because that’s not fair, but it’s not very good either.

Some of the best dialogue came from Agent Smith; he was the only character who seemed to give away his personality and inner thoughts with the words he spoke. I got a real feel of his hate for the place and everyone/thing in it.
Cypher was another good one; he was real, gritty and nasty with a hint of humour. And he said what plenty of us were thinking which, I think, is a good device for holding an audience’s attention without letting on what you’re doing.

The others… Morpheus sounded contrived and preachy and most of his dialogue was an excuse to be abstract, haughty and aloof because of the power he felt as a result of his belief in The One. Trinity (cool name though) gave me a sense of there-because-this-film-needs-a-love-interest and her lines were a bit muddled. On the one hand, she was cool, calm, and strong and yet within a heartbeat her dialogue made her appear a blushing damsel. Very strange. Neo was worst of all… because as soon as he takes that red pill, his lines make him sound not like a person, but a device to keep the story moving. It wasn’t natural.

It might be the acting. The delivery of these lines.
If it is, then the writers can’t be blamed (completely) and the actors could have done with better direction.
But…! So much of the dialogue before the blue/red pill scene feels natural and real because it isn’t abstract. The ideas and themes behind what these people say are such that we understand them.
As soon as Neo is able to move freely in and out of the Matrix, there is so much focus on The One and his job to end the war and saving Morpheus that I just can’t focus any more.

The lessons I plan to take from these movies are simple ones:
-Unless my novel is an abstract piece, don’t piss people off with abstract dialogue
-Keep dialogue true to the character (Would this person swear or not? Are they formal or casual? Do they use short sentences or long sentences? Fragments? What words might they choose?)
-Resist the urge to pepper action scenes with ‘cool’ one-liners, because they just aren’t cool. They’re annoying, and stupid, and nobody does that in real life.

This is all stuff I knew anyway, but having it reinforced this way, especially while I’m working on something new, is really good for me.

Last week I didn’t post any goals because I wanted to keep relaxing. I did a few odds and ends, as I figured I would, and I do feel a lot better for having let myself relax. Now, however, it’s time to look back and see what needs to be done:

Resubmit my sci-fi story Love Bytes to another competition
I did some searching for suitable markets, but didn’t actually send it. I guess that’s better than nothing.

Continue working on WTRE
A few thousand words done, nothing to skip and jump about. I’ve also been collecting together some of the beta feedback for SORB. So peripheral work has been done.

Relax after my op
Definitely! I feel much better this week and all of my stitches are gone now. I have a cough instead, but that’s a hell of a lot easier to deal with than crawling pain from holes in my gut, so… win! 🙂

I guess I’d better get back into the swing of working first.

There. I think once I’ve been able to do these things the rest will fall into place after it quite naturally. I hope so anyway, as that’s what I’m going to do. :p

I'm a thirty-*mumbles* year old (purple loving, cheese worshipping) author of fantasy, juggling a pair of beautiful twin boys with my burning desire to make up stories and write them all down. When I get the chance, I play games, listen to music, and in days long past I even ran a radio show. Though I occasionally write non-fiction, my heart lives in fantasy and my debut novel, Silk Over Razor Blades is now available through Amazon along with part two of the trilogy, Walking The Razor's Edge.
View all posts by Ileandra Young →
This entry was posted in Goals Posts *haha!*, Ileandra's Posts and tagged Agent Smith, Cypher, I don't get it!, Is the Matrix too abstract for it's own good?, Morpheus, Neo, postaweek2014, The Matrix, The Matrix Reloaded, The Matrix Revolutions, The Matrix Trilogy, Trinity. Bookmark the permalink.