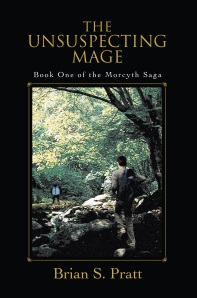 Author: Brian S Pratt
Title: The Unsuspecting Mage
Genre: High Fantasy
ISBN: 9781452303215
Words: 193,130
‘“Want to be a mage? Then do we have the job for you…”
Sounds great for a veteran role-player. When on-the-job training entails battling demons, learning magic through trial and error, and living in a world without toilet paper, things could get rough. But to be dropped in the middle of a forest and having to do it on your own with no instruction… welcome to James’ world’

I like this book. Not only does the idea outlined so succinctly in the blurb push all my buttons, but the tale itself is interesting and incredibly immersive. It’s everything I want from a mashup of high fantasy and contemporary fantasy and I’m probably going to find it hard to avoid cracking in-jokes and leaving role play references all over the place. So sorry in advance for that.
However….

There’s something about this that I’ve seen before. I’ve been trying to think where, but so far no luck. I think it’s to do with the big black spaces with the small area dedicated to the picture. I have definitely seen this before and that, unfortunately is a little distracting.
I can’t remember fully what sort of book the other one was, but I know it wasn’t fantasy. And there’s nothing in this cover which suggests ‘high fantasy’ at least to my eyes. It’s very clear and simple, which I like, but I would probably miss this book if I was hunting shelves. Which is a shame.
Despite that, I like it… I just can’t mark it as high as I’d like because it doesn’t seem to match the genre (or the tropes of the genre, anyway).

James likes games (like me) and books (like me). He needs a job (like I used to) but prefers reading his books and just getting on with his school work (like I used to). He goes off to find a job (eventually) which seems to suit him down to the ground; an employer looking, specifically, for people who know pen and paper RPGs, LARPS and/or MMORPGs.
Hell, that’s  dream come true as far as I’m concerned!
So James goes off to answer this ad, steps through a door and lands in a fantasy world with no sense of how he actually got their or what he is supposed to do beyond ‘what his heart tells him.’
Kewl.
At its core, James has a very simple mission; get home. And that, because of its simplicity opens the door for all sorts of adventures. Because, of course, there’s lots that James can (and should) encounter/do/see/hear/feel on the way.

As he travels, James learns the ins and outs of being a mage in this particular land and time and has to harness his own ability to cobble things together. Something that any DM (noob or vetran) will tell you is a valid, necessary and undervalued skill.
However… his journey was very easy.
Yes, there was some mild peril and yes there were some chases and nasty characters, but considering James is in a land far unlike his own, the only like of which is from RPGs, he just coasts.

Lots happens (I mean lots, this book is a BEAST!) but it doesn’t seem to scar James, or worry him, or change him. I feel he accepts his lot pretty quickly and that he gets what he needs, when he needs it with not very much effort at all.
This, unfortunately, makes me doubt the book. I play RPGs (online and in person). I LARP. Every single one of my characters in any of the systems I play, has become powerful because of what has happened to them. It forced them to think, learn, grow, adapt, compromise, negotiate, sacrifice, fight, bleed, laugh, cry, kill, rescue… all many of things. I see those characters develop, and that’s what makes those games fun to play. James didn’t do any of that and since this book has very clear roots in DnD (at least!) I feel cheated.

But James did have a quest. He found an amulet (of course) which a mysterious background (obviously) which lead him on a merry dance to find it’s origins and the religion it relates to. This leads him miles and miles across the country (on horseback… unencumbered) with the one companion he picks up on the way.

I mentioned this in brief, but since James is the primary character, I need to talk a a bit more about him.
A first I thought he was the classic ‘geek/nerd’ character. But even though he rides a bike, likes RPGs, reads books and is generally quite smart, he isn’t that character at all. He does have an endearing innocence to him, but I was hoping to see that gradually fade and harden as the story went on.
It didn’t.

I’ve since since learned that there are eight books in this series, so there is still space for James to do exactly that, but if the story continues in the vein it has, I’m not certain that he will.

He’s very noble and kind hearted. He’s also slightly snarky at times. All these things, however, seem to lie on top of who he really is. I feel there are only a few instances where we get to see properly into this lad’s head and that’s because of something he does. Everything else feels like it’s there because readers of the genre expect it, so Pratt felt he had to oblige. That’s a little disappointing, because I think Pratt is perfectly capable of making this character stand out. Unfortunately, right now, he doesn’t.

Third person, present tense.
That is VERY hard to pull off without making readers grind their teeth and the fact that Pratt tried, makes me warm inside. I liked the immediacy of writing this way and the insight we got into James by way of his actions.
But it needs work.

I found myself distracted by stilted dialogue, lack of tension and the ease with which James coasts through the story. I kept reading (frantically – despite the length I finished the story in about a week) because I wanted something to go wrong. I wanted it to become hard and I wanted to see him really struggle. But what I got was lots of scenes that I’ve actually played around a table with a pint of cider at my side, rolling polyhedral dice. Not that there’s anything wrong with that (many players of DnD will enjoy this tale) but I wanted more. I think, had I not been a writer, I would have enjoyed the story just as-in.

Also this book is too long. Just… too long. There is absolutely no way to sugar coat this observation. 193k is fine if you’re JRR Tolkien or Robert Jordan (and even they shouldn’t have done it) but this book is the first of eight and very little actually happens.
Lots goes on, but nothing happens and I’m really struggling to say this in a way that makes sense.
James visits a lot of places, sees a lot of people, gets into a lot of trouble, but at the end of it, he’s still just going from A to B while chatting to X, Y and Z on the way. But he doesn’t change or adapt or grow.
Yeah… that’s what I mean – phew!

Besides that I think the version I have would benefit from a proofreader as well as an editor. There is so, so, so much potential in this book, but I really don’t feel it’s been fulfilled.

Average across all scores comes to 3 stars exactly.

Yes, this is certainly one of those cases in which the merits of the book lie in it’s potential rather than what it actually achieved. There is so much scope here to do more and though that wasn’t achieved, the book was enjoyable and I don’t regret having read it.

I’m not sure if I’ll be going on the read the others in the series, but at least, for now, I’m happy that I’ve read this one.

Guess I should talk about goals now.
Well… I certainly had fun working on my diddy list last week…

Send SORB to betas and then forget about it!
Done. Maybe not so much the ‘forgetting’ part, but I’ve sent out the files.

Enjoy my sons’ birthday party
Lovely! Just like last year they got the gorgeous weather and I got the rain. But it doesn’t matter; we had fun, there was cake and good food and lovely company. Which is all I ever want.

Watch the streamed version of King Lear performed by the National Theatre on Thursday and enjoy the all mighty hell out of it!
Yes, and what an experience that was! I adore the play (depressing as it is) and seeing it performed that way (with Simone Russell Beale as the lead; squee!) was incredible. And I got to eat ice cream and drink cider at the same time. What more could I ask for?

Enjoy my grown ups only party on Saturday
^_^
The final turn out was a bit poor (I cooked too much food!) but I had so much fun. So many old and new faces and good music, wonderful company and an all round wonderful experience. And cake. We’re still eating the bloody cake. Good thing it’s so tasty and I like it so much, right? *nom nom nom*

I suppose I’d better come back down to reality and get back to work, right? 😉

That’s plenty to be getting on with. 500 words really isn’t hard these days (not getting it down, anyway) and I think building up my store of ‘ready to send’ stories can only be a good thing. One of these days I’ll win a competition. One of these days, but before I can do that, I need to write.
So this is how I’ll do it.

Oh! Speaking of competitions, my flash fiction comp closed on Thursday. Thank you all so much for entering. I’ll be announcing the winner on Saturday (along with my usual 3rd Saturday post) and preparing to send out the Amazon voucher.

Thanks to everyone who entered; the calibre of entries was excellent and I’m chuffed so many of you took the time to join in the fun.

Right, I’ve talked enough, that’s it. I’ll catch you all at the weekend. 🙂

I'm a thirty-*mumbles* year old (purple loving, cheese worshipping) author of fantasy, juggling a pair of beautiful twin boys with my burning desire to make up stories and write them all down. When I get the chance, I play games, listen to music, and in days long past I even ran a radio show. Though I occasionally write non-fiction, my heart lives in fantasy and my debut novel, Silk Over Razor Blades is now available through Amazon along with part two of the trilogy, Walking The Razor's Edge.
View all posts by Ileandra Young →
This entry was posted in Books, Goals Posts *haha!*, Ileandra's Posts, Reviews and tagged book review, Brian S Pratt, goal list, goals, ileandra's goal, Indie ebook reviews, postaweek2014, the morcyth saga, The unsuspecting mage. Bookmark the permalink.