So… I’ve taken some time to write this post. Dunno why. But I have. Maybe I’ve left the stuff of the day distract me. Whatever. I’m here now. And so, apparently, is ‘Vicki & Lara.’ My first ebook.

And the best part? My book is out before any of Ileandra’s.
Petty? Maybe.
Strange (considering we share a body)? Oh yes.
But satisfying just the same. And I’ve taken some time today to savour that.

But that’s not the only cool thing that’s happened this week. 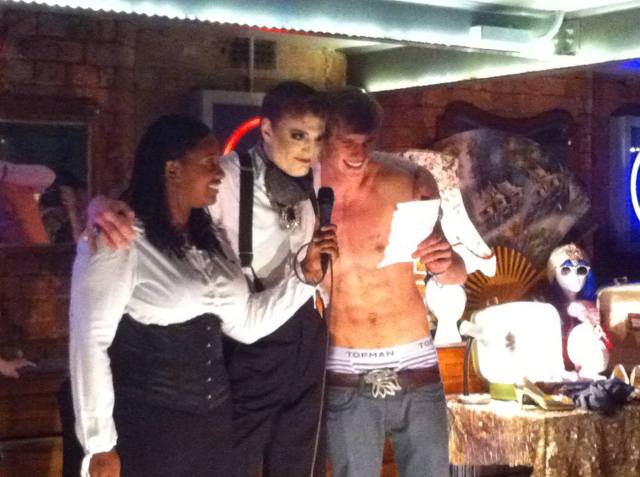 Ignore the hint of fear in my eyes; it was fun.

Electro Tease. Leicester’s only (that I know of) regular burlesque night. Friday happened to be the Boylesque night (which, as it sounds, is boys parting with clothing rather than girls). And I got called up on stage to display a ‘special talent’ with a view to winning a bag of goodies from Lush.

Well… beyond ‘making children’ I only really have one talent. The obvious one. Writing. And when I made the Face (you know the one, the I’m-slightly-embarassed-but-not-enough-to-keep-quiet-I-just-need-to-gear-up-to-it-face) it was obvious that erotica is what I specialise in. So… I wrote some erotica. Just a couple of lines. But I did it on stage. In front of a fairly decent crowd, utterly on the fly.

That was a new and exciting experience. And not just because it was a fun night, but because it’s another example of when I was able to be a writer in the open. To talk about it and introduce myself that way. That’s important.

I take great pleasure in writing erotica and am merely one side of the proverbial coin. My other half, 'Ileandra Young' writes fantasy and the occasional comedy piece. My six-part series 'Meeting Each Other' is available in full, through Amazon and Smashwords while my debut novella 'Sugar Dust' is now re-released (!) available through Amazon via Little Vamp Press.
View all posts by Raven ShadowHawk →
This entry was posted in Raven's Posts and tagged boylesque, burlesque, ebook, Electro Tease, erotica, indie author, meeting each other series, postaweek2013, publishing, Raven Shadowhawk, self publish, vicki & Lara. Bookmark the permalink.