Lookie, lookie at all of the GOOD THINGS!!!

It’s filling up fast and there are so many more blue (or is it green? Can’t tell in the light in here) slips! Way more than the others. Apparently April has been a good month.

To break it down, April has included things like signing off JSA (FREAKIN YES!), the official launch of The Write Feeling, entering numerous competitions and getting some letters out there (to magazines). I’ve also included weight loss milestones (6lbs in two weeks!) and milestones for the boys. Michael AND Leon are walking now, though Michael is that little bit less confident that his younger brother. *snerk* Younger, do remember that there is only one minute between them!

I’ve also put things like Zombie Earth in the jar which was, effectively, my first LARP in over a year. Can you believe that?! A year (and more) since I put on my ears and danced around the woods as Trya. If you don’t know what I’m talking about, I invite you to take a closer look at the picture to the right of your screen. 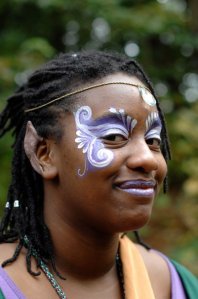 It was so good to get back into LARPing in any for, that I’m thinking about going back this week. That all depends on family though; as there are lots of visits happening this weekend.

Not only is it the boys’s birthday next week (*GASP*) but it’s also mine. Talk about an awesome double whammy! I think the jar for May is going to be pretty heavy with coloured slips.

I’ve not decided what colour I want yet. I’d better work on that because I already have some things I want to add. Not least, the short story I managed to bash out just today. 1,689 words, a complete story for a competition I thought I’d enter, from the Writer’s Magazine. It needs a heavy handed edit, but with a deadline of May 14, I’m sure I can manage it. The hardest part is done. Ish.

So… what about you fine folks? How does your jar look at this point of the year? Nice and full I hope! ^_^

I'm a thirty-*mumbles* year old (purple loving, cheese worshipping) author of fantasy, juggling a pair of beautiful twin boys with my burning desire to make up stories and write them all down. When I get the chance, I play games, listen to music, and in days long past I even ran a radio show. Though I occasionally write non-fiction, my heart lives in fantasy and my debut novel, Silk Over Razor Blades is now available through Amazon along with part two of the trilogy, Walking The Razor's Edge.
View all posts by Ileandra Young →
This entry was posted in FUN!, Ileandra's Posts, Other Writings, Procrastination, Real Life Chatter and tagged #GoodThingsJar2013, gaming, good things, happy, Ileandra Young, larping, launch, postaweek2013, trya, update, zombie earth. Bookmark the permalink.