Soooooo! In answer to my Call for Guest Posts I do have a selection of posts for you from various sources. These fabulous people have been kind enough to take time out of their days to write up a little something for this blog because I’m so crazy busy! You’ll see these pop up over the coming weeks so be sure to keep coming back!

This is the second post of the selection and, in a brief step away from writing covers an absolutely delicious recipe! You all know I’m a LARPer… well this post covers the making of one of the most delicious foods of elf-kind and, since I am a bit of an elf (no, for real… look at the Gallery!), I just couldn’t say no. Thank you so much Juls Stodel for sharing your incredible talent with us!

I was extremely excited when given the go-ahead to do a guest post for the beautiful and exotic Ileandra; partly because it means that the presence of baby geeks-to-be is imminent and partly because it gives me an excuse to indulge my inner geek. See, I am a chef in training; next year I will be going to Leith’s School of Food and Wine (at present I am filling a year by taking a course at the local college with kids much younger than I am. I feel ancient at 24) and, from there, the world is my oyster (well, the West Country). The world of Food Blogging, which I am more familiar with, is one that is caked in this veil of smiles and cupcakes (I suck at cupcakes by the way – they go concave) but underneath it all, it’s serious business – don’t you dare so much as use pre-made pastry on your pie or it doesn’t count as home made you utter, utter fraud.

I first met Ileandra at Herofest, a LARPing event I believe she has spoken about a few times in these very blog pages, with her as a green-clad, glamorous Elf and I as a bedraggled, fur covered Valkyrie. We downed so many home-brewed concoctions together that I don’t think my memory will ever recover. Herofest lets me indulge that geeky, fantasy-loving, escapist side of me before going back to being screamed at by my tutor if I under-glaze a loaf of bread. I can’t really complain, I have had to come up with a vile new anthology of insults from spur-of-the-moment frustrations caused by the ineptitude of others. My vocabulary is increasing at a rapid rate, though not, as my theologian grandmother might have thought, for the better.

Speaking of bread and keeping with the lovely and colourful fantasy themes, I offered up to Ileandra the idea of creating a personal recreation of Lembas Bread, originally spoken of and made famous in Lord of The Rings; a dense, highly nutritional bread, sliced into thin cakes and wrapped in leaves, dark on the outside and cream coloured on the inside. A recipe guarded by elves, it will sustain a man for a full day’s march.

Technically, as a Valkyrie, maybe I shouldn’t be the one presenting an Elf with this recipe, but we’ll let that slide. I made the bread without any leaven apart from one egg to give a slight bounce alongside wholewheat, buckwheat and millet and a decent dose of flaxseed. It is made sweet with the ‘fruits of the Mallorn’ (apricots…) and drizzled with honey before being baked. A sticky outer appearance can be made by wrapping up the baked bread in cling film while it cools. The honey creates the darkened outside while the millet keeps the inside a creamy colour and the apricot preserve melds with the nutty textures and lifts up the earthiness. Wrap in Mallorn Leaves (crepe paper…) for a final finish. 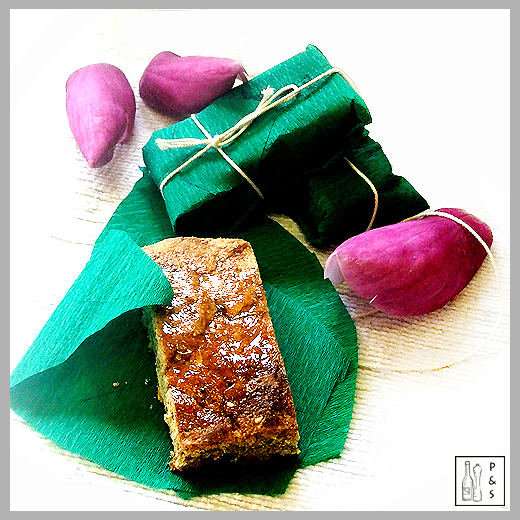 I'm a thirty-*mumbles* year old (purple loving, cheese worshipping) author of fantasy, juggling a pair of beautiful twin boys with my burning desire to make up stories and write them all down. When I get the chance, I play games, listen to music, and in days long past I even ran a radio show. Though I occasionally write non-fiction, my heart lives in fantasy and my debut novel, Silk Over Razor Blades is now available through Amazon along with part two of the trilogy, Walking The Razor's Edge.
View all posts by Ileandra Young →
This entry was posted in Guest Blogs and tagged elf, fantasy, food blogging, guest blog, herofest, juls stodel, LARP, leith's school of food and wine, lembas bread, lord of the rings, mallorn leaves, pepperandsherry.com, postaweek2012, reciepe, tolkien, valkyrie. Bookmark the permalink.