Posted on September 17, 2015 by Raven ShadowHawk

I suppose it would be kind to leave a warning here before you start. Many, if not all, of the links in this series of posts are totally NSFW. If you want to have a look, do, by all means, but don’t be surprised if you find naked boy bits at the other end . . . or girl bits.
Happy? Let’s go. 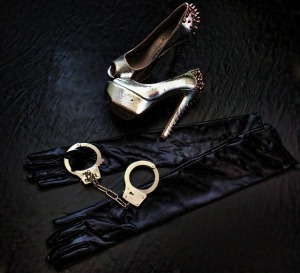 I’m sure there are loads, but personally, when I think bondage, I break it down into three types: decorative bondage, punishment bondage and what I call ‘play-time’ bondage. There is crossover and overlap between these three, but they are pretty much exactly what they sound like. Decorative bondage involves tying someone up for the aesthetic, which can lead to complex rope patterns (sometimes called Shibari) and beautiful knot work. Punishment is primarily for the purpose of causing pain and/or discomfort, while ‘play-time’ bondage may or may not be escapable with a bit of wriggling. This form of bondage focuses more on the act of trust and the mutual enjoyment in both parties.

Rope. Lots and lots of rope! Heh. Obviously not just rope, but this is what comes to mind the most when I think of bondage. Mostly those images of cuffs, bodices and full bodies harnesses made from nothing more than loops and knots. I really want to put some images in here, but I can’t do so without obtaining the copyrights or permission and very often people are reluctant to do so.

However, there are some great people to talk to, particularly about rope bondage. There is, of course, Wikipedia (if you trust that sort of thing), but there are dozens, if not hundreds of websites dedicated to tips and the safe usage of rope as part of a bondage session.

Here we’re talking cuffs and shackles, all made out of leather. These are generally softer and more pliable, able to be worn for long periods of time. Collars, bracelets, belts, straps, harnesses. Some leatherwear is worn outside the bedroom or sexual situations, simply as a piece of clothing. Sometimes referred to as fetish wear, if you’ve spotted somebody wearing a collar/choker, a studded wrist band or belt you most certainly wouldn’t find on the highstreet, this is the sort of thing I’m talking about.

Anyway, leather restraints are more comfortable to wear—meaning sessions can go on for longer!—and can often have clasps or buckets to make them easier than rope.

If I say ‘bondage,’ do you think ‘handcuffs?’ I find this to be what people most commonly think of when faced with the idea of restraints. It’s certainly what you’ll find in places like Ann Summers.

Not particularly safe or comfortable, but the aesthetic is there I suppose. Though . . . for metal restraints, maybe the toys on this site are a little more exciting? Or this site . . . y’know for more intense toys.