Posted on August 9, 2014 by Raven ShadowHawk 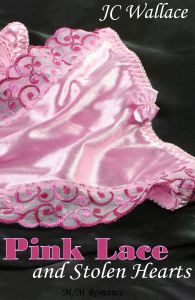 Author: JC Wallace
Title: Pink Lace and Stolen Hearts
Genre: Gay Erotica / Romance
ISBN: 9781311378194
Words: 22,800
‘Greg is my roommate and best friend. He’s been depressed ever since his boyfriend found out that he likes to wear feminine underwear and dumped him. When I saw Greg in those blue silk panties, my entire world changed. I may actually love him, but I can’t. I’m not gay, right?’

My attention span sucks. It must do, or else what reason can you think of that explains the fact that I don’t (and can’t) read any erotica longer than about 60,000 words? I just can’t. 25-30,000 seems to be my cap otherwise I just get bored.

Not a bad thing I suppose, just an observation. Which means I’m increasingly happy that there are so many people out there happy to write to that sort of length. Novellas, sometimes known as ‘lunch reads.’ Because you can read them over lunch 😉

And that’s exactly what I did with this.

How adorable is this story? Either I’m getting sappy or Da Shared Brain is seeping into me, or something, but recently I’ve stepped away from the harder, grittier stuff I’ve been known to read. This story is a touching ‘first time’ story which includes coming out and a good dose of angst to boot. I used to think it’s not my thing but… what do I know?

Nice pants. Wish my arse was small enough to fit into knickers that size. 😉
The image is a good one; a good base. Unfortunately, for me, the surrounding text looks like the efforts of someone self publishing. Not bad but not as professional or unique as some others I’ve seen. A pity, because the style and colour choices work really well with the image.

Law (Lawson) lives with his gay room mate Greg. He has recently come to learn that Greg likes to dress in women’s underwear. Not necessarily as a kink or fetish, but because it makes him feel good. However Law is not upset by this, quite the reverse, he finds himself attracted to the memory of his house mate in frilly pink underwear.
But Greg has a boyfriend. 😦
But Greg tells his boyfriend (Simon) about his desire to wear female underwear and all hell breaks loose. Great for Law, right?
Well kinda….

I love Law’s voice. He’s very real to me, his heart and his thoughts are incredibly clear. The choice of first person as a means to tell the story helps with that a great deal, but if I’m honest, it’s mostly in the strength of the writing.
Greg, is a girlie-man. At least to me. I understand more about his character towards the end, but something about his words and actions strikes me as a fraction too feminine. And it’s not the underwear that does it. While I don’t enjoy him as a character as much as Law, the contrast he provides is perfect. It’s a very good literary match.
(Simple) Simon is a- I can’t really tell you without giving too much of a spoiler. But he makes a great third corner to the triangle these men make. There’s a little bit of everything to be found between them and it ensures the book is interesting throughout.

A slow build, which I liked, and a satisfying crescendo. I guess my only gripe is how easily these two men eventually got down with it. o.O
Yes there was sustained sexual tension and yes there was emotional depth, but these men had never touched each other in this way before. There was no clumsiness or awkwardness or sense of hoooooooly fuck this is actually a pretty big fucking deal! Maybe that’s a flaw in me- should it be a big deal? I don’t know.

But I do know that my first sexual experience with a woman, no matter how much I wanted it, was anything easy and calm and sensual. It was a mess! A very enjoyable and memorable mess to be sure, but still a mess. This felt too… neat….

Wonderful. I thoroughly enjoyed this book and would recommend it in a heartbeat. There were no cringe worthy moments, no icky bits and certainly nothing that made me want to stop. I read the whole thing in one sitting and fast enough that I barely noticed any formatting issues or typos. If they existed at all.

Average across all scores is 3.8 which, rounds out to 4 fireballs.

This was a truly excellent read. And, the fact that it was free makes me even more inclined to keep raving about it. There aren’t enough M/M stories in my life so I’m glad I got back into them with this one. It was a very good start.

I take great pleasure in writing erotica and am merely one side of the proverbial coin. My other half, 'Ileandra Young' writes fantasy and the occasional comedy piece. My six-part series 'Meeting Each Other' is available in full, through Amazon and Smashwords while my debut novella 'Sugar Dust' is now re-released (!) available through Amazon via Little Vamp Press.
View all posts by Raven ShadowHawk →
This entry was posted in Books, Raven's Posts, Reviews and tagged book, book goal 2014, book review, erotica, Indie ebook reviews, JC Wallace, ladies underwear, M/M pairing, Pink Lace and Stolen Hearts, postaweek2014, writing. Bookmark the permalink.