Posted on December 4, 2012 by Ileandra Young 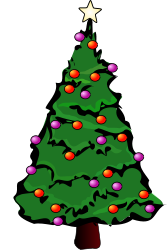 I’m fairly certain I did a post like this last year, but I just need to get it off my chest. -_-

Today is December 4 and yet Facebook is dotted with pictures of Christmas trees that my friends and family already have in their homes and the shops have been playing assorted Christmas carols for at least a fortnight. On Saturday I saw the Salvation Army brass band and the pretty coloured lights are already on all over the city and running up the council’s electricity bill.

Anyway, what I actually want to say is, why do people keep asking me what the boys want for Christmas?! First of all… they’re not even a year old, I doubt they want anything. Second, they don’t HAVE to have anything. This post is designed to sniff and poke at the commercialism of Christmas these days and it’s all the more obvious to me how much I hate it, because I keep getting the same questions and comments.

Oh it’s their first Christmas, you have to get them something!

What shall I get them?

How are you celebrating their first Christmas?

You must be really excited; its their first Christmas!

Well I tell you what, people… I’ll be celebrating their first Christmas the same why I plan to celebrate every other after; with love and family time. Those are the only habits/traditions/expectations I want to instil in my boys. Presents, stockings, bad food, though nice are not what Christmas is and should be about and I want to make sure they know that. I want them to know that the important things are love and sharing and togetherness. I don’t want to raise the type of children who have a freak out on Christmas morning because they didn’t unwrap the toy they wanted, even though they have twelve other amazing gifts. I don’t want to raise the sort of children who go to school, tot up ‘totals’ of how many presents their friends got and then come home to complain about it. I realise a some of that will be difficult because kids suffer terribly from peer pressure and the need to fit in and be like everyone else, but I hope I can raise individual boys strong enough to rise above that to some level. I want them to understand what things are worth and how much time, effort and money goes into something, so they can properly appreciate it.

I don’t have anything against Christmas in of itself. I remain amused that the Christian festival of Christmas takes root in the Pagan festival of Yule and conveniently forgets that the majority of its traditions (tree, tinsel, wreathes) come from the practises of pagans that pre date Christianity by a loooooooooooooooong way. Separate debate. Doesn’t matter right now. I just don’t like the commercialism. That’s all. So if my freaking out over the presents question, makes me a scrooge, I guess I’ll just have to hold my head up high and accept the title.

What do you guys think? How is Christmas celebrated in your home? What are the traditions most important to you on December 25th? Do you think I should maybe make more fuss over the ‘first Christmas?’ After all… they won’t have another ‘first,’ right?

I'm a thirty-*mumbles* year old (purple loving, cheese worshipping) author of fantasy, juggling a pair of beautiful twin boys with my burning desire to make up stories and write them all down. When I get the chance, I play games, listen to music, and in days long past I even ran a radio show. Though I occasionally write non-fiction, my heart lives in fantasy and my debut novel, Silk Over Razor Blades is now available through Amazon along with part two of the trilogy, Walking The Razor's Edge.
View all posts by Ileandra Young →
This entry was posted in Ileandra's Posts, Real Life Chatter and tagged carols, christmas, commercialism, Facebook, Ileandra Young, pagan, postaweek2012, present, scrooge, tinsel, traditional, tree, twins, wreathes. Bookmark the permalink.

11 Responses to I R Scrooge