Things That Make You Go Eeeew…!

There are lots of these things in my life. More than I thought actually.

The list once upon a time pretty much consisted of:
Broccoli
Brussel sprouts
Onions
Mushrooms
Tomatoes
Bananas
and so on…. Stuff that I just didn’t really want to put in my mouth.

Then, I got a little bit older and the list changed a little bit:
Boys
Spots (with icky puss stuff in them)
Romance novels
Neighbours (yes, the TV show)
Eastenders
Spiders (in fact anything bug-like or creepy-crawly)
Barbie
Make up
Take That

Then, I got even older and realised that some of the stuff on the previous two lists had stayed while some had left. Which left the list kinda looking like this:
Mushrooms
Bananas
Eastenders (and any other freakin soap)
TV in general
Spots (with icky puss stuff in them)
Men (at least boys have an excuse for being gross; men are grown ups!)
Spiders and all bug kind (yes, even including ladybirds)

All kinda superficial actually. Not that it bothers me much, because I was superficial back then. More recently however, I look at the list again and realise that there is much more out there that makes me cringe, shudder, wince or flee for the hills and I’m not just talking about mushrooms. My list now includes:
Rudeness
Unnecessary or forced swearing (to look ‘cool’)
Smoking
Twilight
Politicians
Cheap scare tactics in ‘horror films’
Reality TV
Skid marks on the toilet bowl
Badly written erotica
Roadworks
People who complain without realising how good they have it
Certain brio pens (random, yes, but some are really rubbish; I only use Bic now)
The Post Office
Pop music (and Hip Hop actually)
Red nail varnish (on me)

And its all for different reasons. However…! There was something I saw today that makes me think no matter how old I get, no matter how my tastes evolve, no matter how many times the world turns and all the things around me change for better or worse, there is one thing that will now, and always feature in the top end of my Eeeew List.

And that is this: 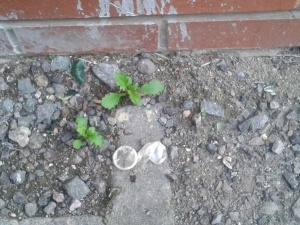 Have a good day everyone! 😛

I'm a thirty-*mumbles* year old (purple loving, cheese worshipping) author of fantasy, juggling a pair of beautiful twin boys with my burning desire to make up stories and write them all down. When I get the chance, I play games, listen to music, and in days long past I even ran a radio show. Though I occasionally write non-fiction, my heart lives in fantasy and my debut novel, Silk Over Razor Blades is now available through Amazon along with part two of the trilogy, Walking The Razor's Edge.
View all posts by Ileandra Young →
This entry was posted in Ileandra's Posts, Real Life Chatter and tagged condom, discarded, disgusting, eeew, gross, lists, rant, rubbish. Bookmark the permalink.

9 Responses to Things That Make You Go Eeeew…!