Funnily enough, I got enough yuks out of the name the first time I heard it and now, however many years on it just seems even funnier than it was then. Time has matured the joke rather than made it boring.

Anyway, down on the south coast, Conception is a gaming convention catering to the likes of RPG, Board Games and LARPers alike. Nothing at all like the LARPs of Herofest, incidentally, but it was certainly at Conception that I got my first LARP experience.

Anyway, picture seven rapid game addicts piling into a three bedroom lodge from Wednesday to Monday to cram in as much gaming, alcohol and bacon as possible into five days.

It always is. Always and this year was no exception at all. For the very first time I actually bought a string of new games (probably too many, but hey its my last Con for a while) new dice 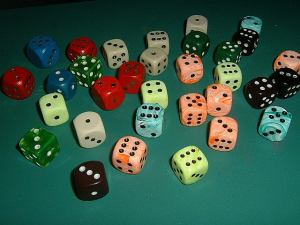 (of course!) and enjoyed a bunch of games. No new roleplay systems, but I did enjoy what I got to play. It was another year that I didn’t manage to play Cthulhu or Feng Shui, but considering the fact that I had to spend a good portion of one night figuring out how to escape a whipped cream pit trap (!!!) I think it went pretty well.

I got to play a string of new board games I’ve not experienced before as well. Order of the Stick I think was my particular favourite new game. It was a good few hours of game play as well, but its given me a brand new love for the comic which, I’m glad to be able to read again.

I’m not going to go into all the details of the Con – I don’t have the time I’m afraid, and I’m too ill – but its given me a chunk of new pleasant memories to enjoy for the rest of my life and to hold close next year when I probably won’t be able to go.

So… thank you very much everyone! I had a an absolute ball! I’m sure I’ll see a few of you on Friday for the next game session. :p

I'm a thirty-*mumbles* year old (purple loving, cheese worshipping) author of fantasy, juggling a pair of beautiful twin boys with my burning desire to make up stories and write them all down. When I get the chance, I play games, listen to music, and in days long past I even ran a radio show. Though I occasionally write non-fiction, my heart lives in fantasy and my debut novel, Silk Over Razor Blades is now available through Amazon along with part two of the trilogy, Walking The Razor's Edge.
View all posts by Ileandra Young →
This entry was posted in Ileandra's Posts, Real Life Chatter and tagged board game, comic, Conception, convention, Cthulhu, dice, game, game addicts, games, LARP, oots, order of the stick, pleasant memories, RPG. Bookmark the permalink.