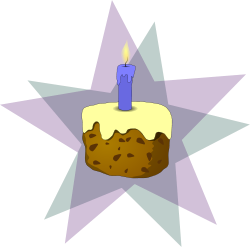 I knew I’d forget! Well… I was rather hoping that I wouldn’t, but I did. Alas.

Anyway, point is that the birthday and/or anniversary of my blog slipped by without me saying something about it!

October 10, 2010 my very first post on my then ‘Wibbly Blog’ was published to the internet world. I believe the post, to date, has had something like twenty views and most of them are actually me going back to look at it and coo because it was pretty. Hehee.

Now, its October 20 2011 and I have turned full circle. Or at least I feel I have. A massive loop which has brought me right back to where I started and I can’t help but feel horribly depressed by that. Its sad.

But… then I look back over the last 12 months and realise that that is very much untrue. Yes, I may still be unpublished (which was my main gripe) but nothing happens over night (or in a mere 12 months). More than that, I have grown in a way I could never have imagined this time last year.

I’ve taken steps as a grown up and made decisions as a woman that I never contemplated ever having to make. I’ve settled into a comfortable routine that, while it is routine, is still a sign of growth and maturity. Looking for comfort in stability is not boring, its what plenty of people crave, though they might deny it.

I was going to use this entry to go back over lots of old posts and gush about them, but I htink that would be wrong. Its too much like mulling over all the things that didn’t work or didn’t go quite the way I wanted them to. Instead I should be looking forward. Gazing ahead. Making plans. Forming goals.

This year’s NaNoWriMo stars in 12 days. 12 days before the crazed frenzy of writing every night until my fingers ache takes over and I barely see Dave because I’m so intent on my computer screen. I remember that well from last year. We weren’t living together then; at least this year I’ll be hopping into bed with him when I’m too knackered to write any more. I have two stories in mind and I’ve put the first of those onto my novel info page hoping it will give me something of a kick start. We’ll have to see. The second idea is so far removed from what I normally write, that I might end up chickening out and not doing it at all. Heh, we’ll have to see.

But what else have I done this year? What else should I be proud of?

Joining a writer’s group. Sounds small, but regularly opening my work for critique from others was something that I desperately needed and only half admitted to myself when joining the Leicester Writers Club. The Phoenix Writers are exactly the sort of group I need. Constructive, helpful, friendly. A group I found after an invitation from Maria who I met at Alt Fiction.

And that’s something else I might never have done last year. I would have been frightened out of my mind! Though going to that event has made me a deal more determined. The comments I made about how intimidating it was to see such clusters of middle aged white men have made me all the more focused on pushing to join them as a young black woman. Yikes!

I started submitting work again. Granted, I had a similar freak out as I did last year about not being ready, but that is far more about the quality of the finished product than realising I’m not actually finished at all. But I’m learning to take the knocks. I’m branching out into new genres and testing my writing ability with challenges and submissions to anthologies (more about that when I know more).

However, I think the most important discovery I have made this year was documented in a blog from March. Its called I Am Not Alone and the more I look into Twitter and Facebook, various blogs, forums and websites and groups, the more plain it becomes. While on the one hand that is terrifying just from the sheer weight of the competition, its also comforting to know that there are lots of other people in the same situation as me, who have the same loves, joys and fears as I do. There is a whole community of us that spans the entire world and it grows bigger and bigger with every passing day.

The greatest achievement of this year, I feel, is taking the steps to dip my toes into that pool. I’m not fully immersed in it, not by a long shot, but I guess that’s step two and the plan for this year. 😀

I'm a thirty-*mumbles* year old (purple loving, cheese worshipping) author of fantasy, juggling a pair of beautiful twin boys with my burning desire to make up stories and write them all down. When I get the chance, I play games, listen to music, and in days long past I even ran a radio show. Though I occasionally write non-fiction, my heart lives in fantasy and my debut novel, Silk Over Razor Blades is now available through Amazon along with part two of the trilogy, Walking The Razor's Edge.
View all posts by Ileandra Young →
This entry was posted in Ileandra's Posts and tagged anniversary, nanowrimo, postaweek2011, write, writer, writing. Bookmark the permalink.