Describe your daily routine when you get out of bed in the morning.

Really?  You really want to know this sort of rubbish?  Well okay… it depends on whether its a weekend or a weekday.  Take today for instance; I’ll tell you how it was supposed to go and then how it did go. 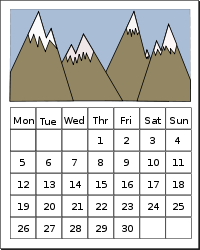 I was supposed to get up at 7am. I was supposed to come downstairs in my work out gear and put on the Wii fit, burning off a good 100 calories or so before the day even begins! Then I was supposed to have my shower, come back down and do a little bit of writing before sailing off to work in a fabulous mood; energised and positive because of my bout of exercise.

What I actually did was wake up ten minutes before 7am because I was busting for the loo. o.O Then I stumbled down the hallway, used it and stumbled back up again, trying to make sure that I didn’t t trip and crack my face on the floor after mis-negotiating that step down towards the bathroom (seriously, who’s idea was that?!).  Then I went all the way back into the bedroom, and removed the 7am alarm from my phone. Ha! Got back into bed turned over and slept for another hour. -_- No work out for me today!

Alarm goes off at 7.40am and I snoozed it for another ten minutes which I used to try to get my eyes open without blinding myself in the glare streaming through the window. Then, as if the universe itself had mercy on me, the sun went in.  It hasn’t come back yet by the way. But that meant, when the alarm went off again, I was pretty much awake enough to navigate the step again and get in the shower.

I like showers. I used to have baths in the mornings, but its so much quicker to have a shower. Its greener too; all that water saved.  And I feel cleaner.  It also means that when I’m dressed I can come downstairs and had even more time on the computer.

Like now for instance; I write this 750 words now because I have no other time to do so in the rest of the day; its so busy! Unless I take some time specifically out of my day to do it – which is tricky so early in the week – there is just no other time. But I like to do it! Like the exercise thing; doing it before your mind has had a chance to remember that it hates work (because it takes me away from writing), that I have an appointment with the doctor at a really daft hour of the day, followed by a rabbit food lunch and then a trip to the recording studios. Its a crazy busy day. Monday’s usually are.  So writing this now is a great way for me not only to populate the blog and provide content, but do it well, before my mind melts into a steaming pool of ‘dear god, there aren’t enough hours in the day!’

So that’s the weekdays.

Weekends are freer.  I don’t really plan anything for a Saturday morning, usually because I have a driving lesson, but there was a point when I was naturally waking up at 8am. I’d love to get back to that because, again, it helps me write and it lengthens my day. As it is at the moment, I have to force myself to get up at 10am just to be sure that I don’t waste half the day rolling back and forth under the duvet. It is on weekends that I usually come straight down to the PC; no pretence at exercise at least until I’ve checked my business email.  Particularly at the moment; I’m still talking to people from Alt Fiction and trying to put together a plan of action for the next few months.  Doing that before eating – which is the point that I usually hit Facebook – can only be a good thing insofar as avoiding distraction.

Only after I’m satisfied that my affairs are in order will have have a shower and then come back down to do the fun stuff.  Notice how I didn’t mention eating in there?  That’s because I don’t!  On the Sunday it wasn’t until my partner came downstairs, a good two hours after I first surfaced that I realised I hadn’t had any breakfast yet.  Well… by that point, its called Brunch isn’t it?

I'm a thirty-*mumbles* year old (purple loving, cheese worshipping) author of fantasy, juggling a pair of beautiful twin boys with my burning desire to make up stories and write them all down. When I get the chance, I play games, listen to music, and in days long past I even ran a radio show. Though I occasionally write non-fiction, my heart lives in fantasy and my debut novel, Silk Over Razor Blades is now available through Amazon along with part two of the trilogy, Walking The Razor's Edge.
View all posts by Ileandra Young →
This entry was posted in 80 Post Challenge, Ileandra's Posts, Real Life Chatter and tagged 80 Post Challenge, day, early morning, ileandra, Ileandra Young, monday, postaweek2011, routine, saturday, weekday, weekend, write, writer, writing. Bookmark the permalink.