Today is the day. Well… tomorrow is the day, but today is the day I leave here and head down to my mum’s place so we can all leave together at stupid o’clock in the morning. Did I not tell you? I’m going on holiday! A glorious week of sun, (black) sand and sea as my mum, my sister jet off to Tenerife.

I’m not as excited as I should be. Or else I’ve gotten much better at hiding it. I can’t decide which it is. I think, maybe, that it will start to kick in when I make a move towards London as it normally does. Its always when I’m actually moving that I start the bounciness.

I’m far more excited about being able to tell them all about Clash. I’ve made a specific point of not telling them over the phone. I want to be face to face with my family when I share the news about how things are going. I want to see their faces when they finally realise that I’m not kidding. I want to see their expressions change when they realise the one thing I’ve been talking about consistently since thirteen years old has actually happened. Not as I expected, but it has happened. And that is key. I’m going to explain to them how NaNo works and what I did in November (again, because I’ve already told them once before) and then I’m going to tell them about the editing process. And then, best of all, I’m going to show them my book cover. I would put it here, but I want to wait. I think when I’ve managed to get my copy and see it properly I’ll start organising the shop I was talking about.

Do you remember a short while ago I talked about a shop? A shop through which I’d sell personalised short stories. Anything from 1,000 words right up to 10,000. If you want more we’d have to negotiate that. But when I write stories as gifts, it seems to go down really well. So why not offer the service? Personalised short stories? I put it about on my Facebook when I first came up with the idea and it seemed to be received really well. So I figure I’ll do that and get it all writing up and some Terms of Service (TOS) as well so people know what they can and can’t get. When all that is finalised I’ll open up the shop and include the ability to buy Clash of the Animal Kings as well.

Its bizarre, CreateSpace really expect me to make money so they keep reminding me to fill in those tax forms. I haven’t done it yet, but I’m going to as soon as I have a moment spare. At this rate, it may well be after the holiday now. So that will be nice. And, if I do that, I’ll have to think more seriously about what I can and can’t do and how to pay for things. Writing a story or an article or a blog post is fun. I love doing that, so I don’t care about being paid for that. But the my time is incredibly valuable and, with most creative arts like this, time is what you pay for.

Anyway, that’s all stuff to come, I’m supposed to be talking about my holiday.

Not that there’s much to say just yet. I’ll fly out on Friday at something like 6.10am and be back the following Friday. I will still post while I’m away (finger’s crossed there will be time) but those posts will only be the 80 Post Challenge. I’ll save other posts for when I’m back and I have a bit more time to spend. And there will be a gallery too. I may well have it as a gallery within a post, rather than a gallery like the one at the top of this page, but I’m well known for taking foolish amounts of photos when I’m on holiday. I did it when I went to Spain (also with my mum and sister) and I did it when I went to Italy and Paris (both with the same awesome friend). I think my record on my last holiday (which was Spain I believe) was a good 800 photos. That will be a hard target to reach and then exceed, but I plan to try. I have a very old digital camera with me (something like 3 megapixels) but it does the job and I have three memory cards to take with me as well. That should be plenty to start me off and, if I really have too; I can email some of the photos to myself to save me space like I did in Spain. 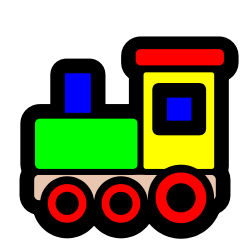 Ooo. Yep, there we go, starting to get excited now. I can feel it! Well I have about 90 minutes before I should be trotting off to the train station so I’m going to do my bits and bobs.

I may be able to keep my Twitter feed up to date while I’m away, but I doubt it. If I can I’ll use it to keep you all clued up into what I’m up to, so don’t forget to keep an eye on that for updates of what I’m doing.

I'm a thirty-*mumbles* year old (purple loving, cheese worshipping) author of fantasy, juggling a pair of beautiful twin boys with my burning desire to make up stories and write them all down. When I get the chance, I play games, listen to music, and in days long past I even ran a radio show. Though I occasionally write non-fiction, my heart lives in fantasy and my debut novel, Silk Over Razor Blades is now available through Amazon along with part two of the trilogy, Walking The Razor's Edge.
View all posts by Ileandra Young →
This entry was posted in Ileandra's Posts, NaNoWriMo 2010, Real Life Chatter and tagged clash, Clash of the Animal Kings, Facebook, holiday, ileandra, Ileandra Young, nano, nanowrimo, postaweek2011, twitter, write, writer, writing. Bookmark the permalink.